Never want to miss an insight?

Subscribe to get new insights & updates delivered to your inbox!

Why you do not need to be a "great illustrator" to be a great graphic recorder. The universal language of simplicity. 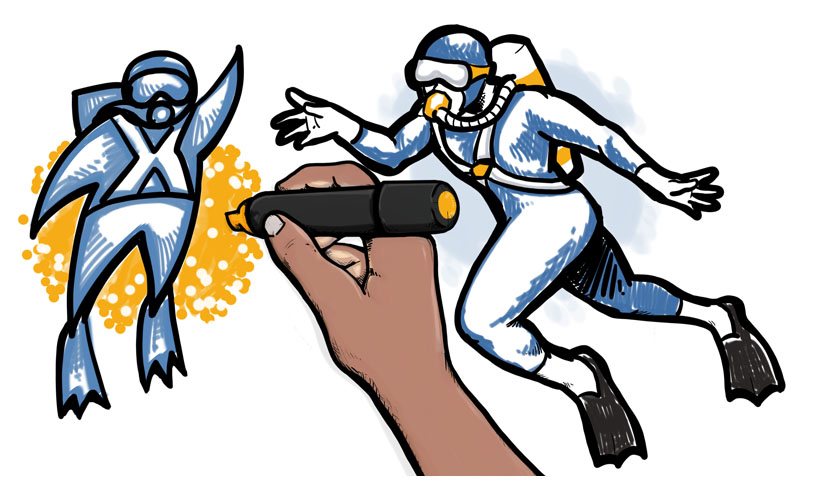 True or false: Do you have to be really good at drawing to be an effective graphic recorder?

Because graphic recording/sketchnoting is visual and drawing is a key component people often think that you have to be a gifted illustrator to do it well. I personally have a drawing background, but I do not draw my confidence (pun not intended) as a scribe from that fact. As my previous posts have related, I believe it is the ability to listen keenly and synthesize ideas in a concise way that makes a good scribe -- and that is really what has sustained my career over this long period of time.

As I have matured, I find now there are many moments when I often throttle back the "wow" imagery and go for the elementary level visual because I have come to really appreciate the value of a well placed, simply constructed graphic. Though there are still plenty of opportunities where I can showcase my art school education and "10,000 hours" of drawing experience (if the client references Game of Thrones or Spider-Man, then yeah, that is a "slow pitch over the plate" for me that I will probably jump on); today though I find there are just as many times when I will go for the simpler graphic instead of more "flashy" images.

Why going for simple imagery can have such an important impact

The reason that I find myself using less complicated graphic techniques more often now is, first and foremost, I think from a client perspective, it is good to communicate visually using simple iconography because it gets straight to the point and is more universally understood. I do this a lot when I am working as a graphic facilitator with small groups and helping them develop visual models or concepts that they can recreate themselves. I am currently working with GE Healthcare to help their sales team design a visual concept that they can quickly sketch themselves at potential customer meetings for a new product and service they are developing. I am creating graphics that are simple enough for anyone to draw on their team, whether they are artistically inclined or not.

I have also found that it is good to utilize a style that is less embellished when depicting visuals that require drawings of people or groups to communicate concepts and topics that depict negative circumstances and bad experiences. For instance, if the conversation is on managing "dysfunctional team members" then drawing a cartoon face with distinguishing features could inadvertently resemble someone in that group. In this situation, it is probably better to draw basic sad faces, or star people, or even silhouettes, rather than, say, a cartoon guy with a receding hairline, glasses, and a mustache -- because someone may think, "hey, that looks like Jerry in Accounting! He really does suck the life out of this team!" That actually happen to me once years ago when I drew a cartoon character seemingly from my imagination but had inadvertently drawn a caricature of one of the 200 participants at this event. The accidental resemblance to one of the participants was picked up upon by another meeting attendee who then remarked on it causing a lot of unwanted laughter from the group much to my chagrin. I guess I had glimpsed the face earlier and it just spilled out of my marker --um, whoops! Instead of drawing a cartoon illustration in that instance I would have been better off utilizing one of my "actors" to convey a dysfunctional team member. Actors, are what I call my basic visual library of images that I can draw rapidly without using the same level of concentration and precision that a cartoon might require. They are a step up from stick figures in their expressiveness but still basic enough to be easily rendered without a lot of detail.

Another reason why I find myself going back to basics more frequently is because much of the graphic recording work I find myself admiring was created by people who probably did not identify as "natural drawers" growing up -- you know the kid in class who got "oohs" and "ahs" for drawing, Darth Vader and Spidey in elementary school. But they have honed their drawing skills through practice in a way that is compelling in its simplicity and extremely powerful as a visual communication aid.

I firmly believe that you can become a terrific real-time graphic recorder and visual storyteller without innate drawing ability. Though, I do believe that every graphic recorder should keep a sketchbook and continue to practice drawing the things they are either uncomfortable with (such as studying basic anatomy), or just to build up their visual lexicon, however it is not necessary to be a professional level illustrator to become a great scribe.

An example from my past created in real-time that showcases my abilities as an illustrator versus a graphic redo years later using simpler imagery ("star people", some of my favorite actors to utilize)

The first image you see above was done in real-time about 10 years ago for a session in Italy. It is a graphic record of a conference call that is really just an elaborate mind map based off of an oceanic metaphor the client was using at this event. I would describe the graphics I did that day as "peak Christopher". Meaning, it was done during a time when I seized upon every opportunity to showcase my proficiency as an illustrator with the ability to dial-up detailed images like scuba divers and John, Paul, George, and Ringo in their Yellow Submarine instantly to portray cultural solidarity. The client feedback was very positive but I look back on it and wonder if all that visual flourish was necessary to communicating the story. I have a tendency to be very critical of my own work and quite frankly, I think that is a good thing. You should always continually reevaluate your work and look for ways to challenge yourself for future growth. In this case, I decided to replace the "peak Christopher" graphics with star people and less ornate drawings as an experiment in stylistic differences to see if the visual story still was engaging.

The above image is the exact same graphic as the original one except that I replaced the "peak Christopher" graphics with simple drawing techniques. Not only do I find this just as effective as my original but I also believe that the story benefits from not being "overly drawn" in places where I was originally more showy. A good example of that is the scuba divers that I drew to call out the new training program they had implemented. The original drawings use figures that are well defined and would not be out of place as superheroes in a Marvel comic. Yet the new version has replaced them with quickly drawn "star people" that are pretty much featureless except for the scuba gear. I believe that the redo is more accessible because most people can see themselves as one of those swimmers -- the training metaphor is made stronger because the simplicity of the images speaks to a broader audience.

So, if you are just starting out as a graphic recorder, or are an experienced one who is looking to change up your style every now and then, I encourage you to try going "back to the basics" sometimes because it can greatly improve your abilities as a real-time visual storyteller by communicating ideas in a way that is unadorned, yet still thought-provoking due to its simplicity. And if you are an illustrator worried about missing out on opportunities to show off your drawing skill, I am not trying to dissuade you from that. All I am saying is that you should think about including some simpler iconography to your repertoire for the same reason that road signage uses basic images rather than detailed cartoons -- it is effective because it is uncomplicated and universally understood.

If you need some tips on basic graphic techniques, then I highly recommend the book, Rapid Viz by Kurt Hanks and Larry Belliston.

And if you are a company or organization that would like some guidance on how you can develop basic drawing skills so that you can confidently and competently communicate your big ideas to a broad audience then please contact Griot's Eye to learn how we can assist you in becoming a visual storyteller. 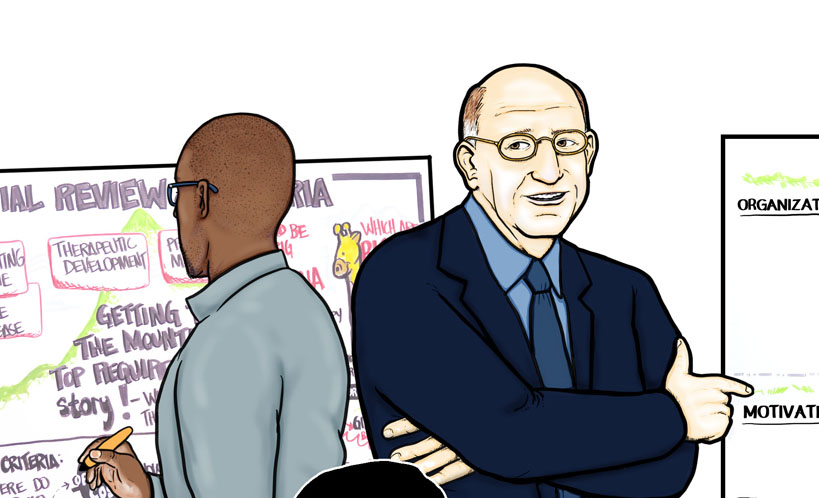 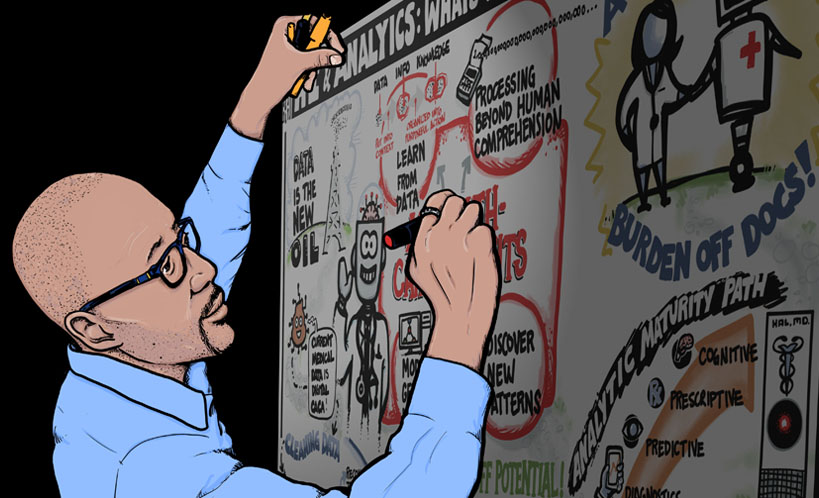 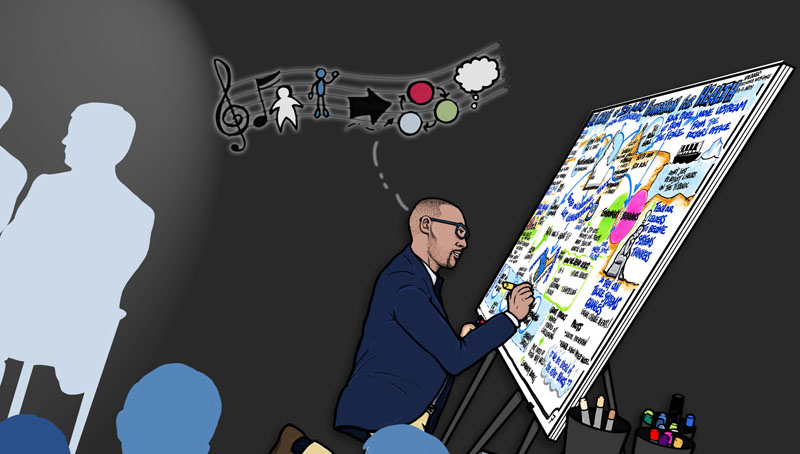 Let’s talk about your event and how to deliver a meaningful experience sure to leaving people talking!

Fill out our interest form and we will get back to you soon! Portfolio available upon request. We look forward to hearing from you!