Once when I was 4 my mother had to discipline me after nursery school (shout out to La Petit!) because I jammed my pencil into another boy’s hand because he told me I had forgotten the mouth on my drawing, and so he added “a smiley face” to my picture of Spider-Man. SPIDEY DOESN’T HAVE A MOUTH DUMMY!” I suppose I gravitated to drawing in the first place because I enjoyed the solitude of pencil and paper and tuning things out so I could unleash my imagination with input from no one else. Seriously… No. One. Else. I graduated with a degree in Visual Art at college (shout out to Scarlet Knights!) yet looking back I realize my education was predominantly focused on art created by individuals. That was fine with me at the time because I subscribed wholeheartedly to the idea of artist as solo auteur.

But one of the things I am most grateful for about my time with MG Taylor Corporation isn’t just that I was introduced to the craft of scribing and graphic facilitation in general, but that the methodology, discipline, and principles I learned there could be applied to my thinking as a visual person. If you don't know about MG Taylor and its founders, Matt and Gail Taylor they created the DesignShop process which utilized graphic recording as a key element of their collaborative strategy and visioning meetings. The DesignShop process has been adopted by organizations and facilitators today all over the world (whether they know where it originated or not) to assist groups in getting to collaborative decisions by design at an accelerated pace. Ernst & Young licensed their methodology and process in the mid-90s and hence helped to introduce much of the world to the type of graphic recording we see flourishing today.

MG Taylor opened me up to the beauty of collaboration. The idea of different people with disparate skills and talents working together for larger organizational goals was new to me then. And I liked it. More importantly, the fact that graphic skills could be a vital part in that collaborative process in helping people to see and discover patterns and relationships was downright revelatory to me.

But I won’t lie. It took a little time for it to sink in.

My fitful beginnings as a knowledge worker and scribe (graphic recorder)

Though my first scribing foray went well enough, it was relatively low stakes for me personally. I had volunteered to support a community event in Orlando, Florida called “The City of Light” in 1992 that was facilitated by MG Taylor. The “City of Light” was about increasing volunteerism in Orlando and the project culminated in a big event that was a series of facilitated community dialogues that were to be graphically documented. To orient us there was a 2-hour crash course on this thing called “scribing” that I attended with the other volunteers. I still remember it like it was only 27 years… er, yesterday. There I was seated in the audience of about 30 people watching that introductory scribing demonstration and I had an epiphany: What the f*ck is this? Why wasn’t this at the job fair?!?

I really came to the attention of the Taylors after that initial scribing opportunity through my boss at the nonprofit I was working for. She was a big proponent of the Taylors and I started walking over to their place in downtown Orlando because she wanted me to learn as much as I could about their methodology so that we could incorporate it to help support our mission. But the real reason I hung out there increasingly was because they had the coolest damn office I had ever seen — Matt Taylor had a Fender Stratocaster for Pete’s sakes! So I was super impressed with what they were doing there — whatever the hell this “DesignShop” shiznit was (forgive me, but it was the early 90s, “shiznit” was a thing people said back then. Really, fo’ shizzle.)

When I finally got a chance to scribe in front of one of the founders, the “G” in “MG Taylor”, Gail Taylor, I was a little nervous. Actually, I was a lot nervous — I had a hard time even holding the markers and writing on a straight line. I think it was because I was so nervous I did the one thing a scribe must never do — I checked out of the conversation because I felt overwhelmed, and then thought I could rely purely on my skills as an illustrator to cover that up. In other words, I was no longer going to report, I was going to do “parlor tricks”, as graphic facilitator and designer Andy Park once described his first impression of scribing. (side note: Andy was introduced to scribing through Ernst & Young’s ASE center in Luton, England after MG Taylor licensed the methodology to EY in the mid-90s. His TEDx Talk is a hilarious and insightful recounting of how he came to see the value of art in relation to business.)

The “parlor tricks” I had nervously devolved to during that early scribing experience with Gail Taylor were not enough to get me through. And in the middle of drawing a caricature of one of the participants (that was probably borderline offensive now that I look back on it) I felt a tap on my shoulder. Startled, I turned around to see Gail with her hand out, gesturing for me to give her the markers. She took over and facilitated and scribed simultaneously while I took a seat in the back and watched.

I always knew how to draw, but it was learning how to really listen that changed my world

It was at that early moment that I really understood what the bedrock of this scribing thing was all about. And that is LISTENING. With scribing, listening is greater than pretty pictures.

If all you can do is make pretty pictures then you will be uncovered and eventually someone will tap you on the shoulder and take the markers away*.

*I am not dissuading you from making “pretty pictures”. Lord knows I have made a ton of them in my career and will make a ton more — but I’ve learned to always be creative in service to the dialogue.

So how did I learn not to have the markers taken away from me and what can you draw from my experience? The takeaway is that I didn’t become a true scribe until I honed my listening skills so that they matched my graphic skills. Working with teams of hugely talented colleagues and mentors (and lifelong friends) in support of all types of groups and organizations who were working together to achieve shared goals I learned to become a better listener. A listener that orients his or her mindset to one of openness, creative exploration, and service.

To get to that level of listening keenly so that I elevate my scribing to beyond being just a pretty picture, but something meaningful to the groups I work with I have developed this mantra, which I talked about at the first “Happening” event (an MG Taylor reunion of sorts):

I am not separate from the group. I am a member of the group. A member who just so happens to have learned a special skill that is useful to the other members of the group. I will share my skill with them.

The 4 main responsibilities of a graphic recorder (according to me)

Without that simple mindset of openness and service you can get overwhelmed by the data you are receiving while scribing in real-time. And if you are inclined, you can begin relying solely on your artistic skills to try and cover-up the fact that you have become lost in the details — tuning out things like I did as a young drawer. But scribing, graphic recording, visual sketch-noting, (whatever the kids are calling it nowadays) is all about tuning in not tuning out.

MG Taylor had a collection of axioms that they used as part of their DesignShop process. One of the axioms they used to orient groups was:

Everyone in this room has the answer. The purpose of this intense experience is to stimulate one, several, or all of us to extract and remember what we already know.

Through my experience I came to understand that it was the scribe’s duty to facilitate that “intense experience” to help stimulate the group’s collaborative process. Through listening with a mindset of openness, creative exploration, and service to the group’s input the scribe utilizes their special graphic skills to synthesize and output their information to help them uncover the answer(s).

If you are listening openly and keenly and seeing yourself as a member of the group you are supporting rather than separate then you can not only make a “pretty picture”, but also you will do something much more than that: you will do something that resonates, illuminates, and tells a real-time visual story of what it is you are capturing.

If you're interested in learning more about graphic recording and how I began my career then please leave me a message! I'd love to hear from you!

And if you're a facilitator, event coordinator or work with an organization seeking to make your next meeting a more impactful and meaningful experience then take the next step! 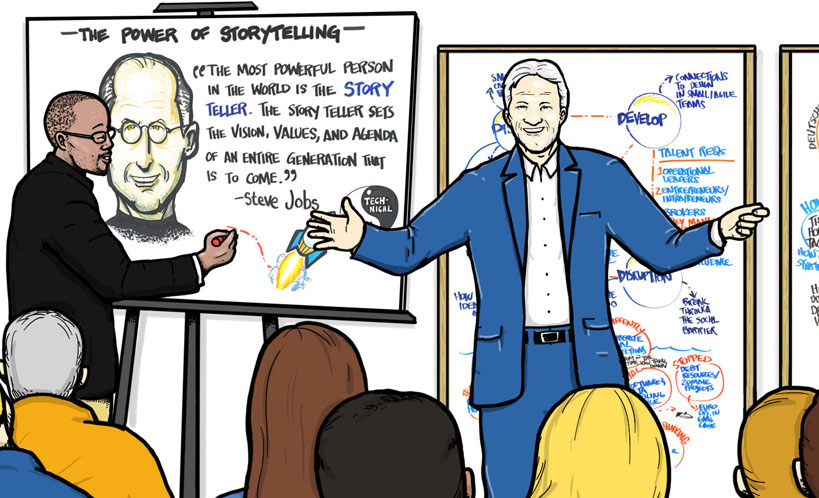 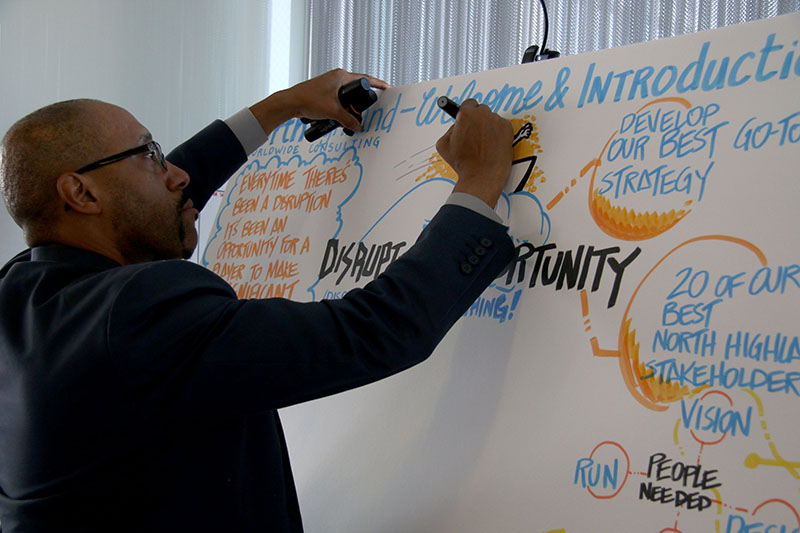 Three Essential Tools To Be An Effective Storyteller